The Jihadist Cleansing of Christianity from the Holy Land 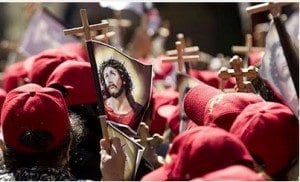 Christians in Muslim countries are awaiting Christmas not with joy, but with trepidation.

Fox News reported that in Iraq, “Christians are afraid to put up a Christmas tree or other decorations, according to one Christian pastor in Iraq. Such displays of faith in an increasingly extremist nation can bring threats and violence, say human rights groups. Christian churches must be regularly guarded, but congregants are even more on edge during their holiest days.”

And in Nigeria, according to Reuters, “fearing attacks by Islamist militant group Boko Haram over Christmas, Nigerian police said on Sunday they had ordered extra patrols, surveillance and covert operations to better secure potential targets during the festive period. The militants have struck every Christmas for the past three years, most dramatically in 2011, when they bombed three churches. One of them, on St. Theresa Catholic Church in Madalla, on the edge of Abuja, killed 37 people and wounded 57.”

Likewise in Indonesia, Reuters reported that President Susilo Bambang Yudhoyono “has ordered police to step up security around churches over the Christmas holidays following reports of possible attacks.”

Please take a few minutes to pray for the persecuted believers who live in Syria, Iran, Iraq, and Egypt.  Pray for Abb’s comfort to those who have lost loved ones, pray for courage and strength for those who live there that they would stand strong in their faith.

Manna From Heaven Live – Return of the JOES