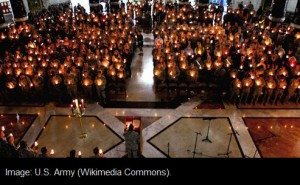 Don’t say Christmas. That’s the message that was conveyed to a group of soldiers at Camp Shelby by an equal opportunity officer from the Defense Equal Opportunity Management Institute, according to a soldier who attended a recent briefing.

It’s unbelievable that the Army would ban ‘Christmas’ like it’s a bad word,” said Michael Berry, an attorney with the Liberty Institute, a legal firm representing the unidentified soldier.

Two weeks ago, a routine meeting was held at the Mississippi base with various leaders of the 158th Infantry Brigade. During the meeting, they discussed an upcoming Christmas football tournament. The equal opportunity officer immediately objected to the usage of the word “Christmas.”

What does it mean? (Commentary from HN News editor)  This is how the persecution starts. Restrictions on your liberty, like coils of an anaconda snake wrapping itself around you. And so it begins…..

LEFT BEHIND if I don’t believe in the rapture?