Despite Spike in Terror, Israel Expected to Release 26 Convicted Terrorists Next Week 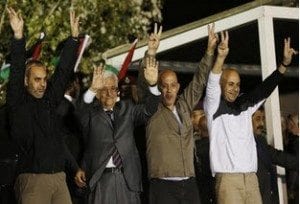 Release is part of agreement that led to restart of peace talks with Palestinians in July; widespread expectation that Kerry will present framework accord soon; conflicting reports on US security proposals.

Israel is expected to go ahead and release a third group of convicted Palestinian terrorists early next week as part of the deal that led to a resumption of Israel-Palestinian talks, despite the recent uptick in terrorist attacks.

Government officials said that there has been no change in the plans and even Tourism Minister MK Uzi Landau, from the right flank of Likud Beytenu, said that commitments entered into needed to be fulfilled.

The group of ministers mandated with drawing up the names of an additional 26 prisoners to be released is expected to meet by the end of the week. Their decision does not have to go back to the cabinet for approval.

Although Landau said that Israel should perhaps consider delaying the expected release of another 26 Palestinian prisoners, he said that Jerusalem should not cancel it.

“In principle if we already made the basic mistake of freeing terrorists, I do not suggest that we get into the area of not abiding by agreements we took upon ourselves,” Landau said.

“If you take upon yourself to implement something,” he continued, “implement it. Agreements have to be implemented.”

Landau said that was especially true since “the Palestinians are not upholding their part, nor fulfilling their obligations, and this is true of every round of negotiations over the last 20 years.”