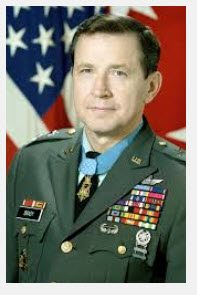 WASHINGTON – Retired Army Maj. Gen. Patrick Brady, recipient of the U.S. military’s highest decoration, the Medal of Honor, as well as other top retired officers, say President Obama’s agenda is decimating the morale of the U.S. ranks to the point members no longer feel prepared to fight or have the desire to win.

“There is no doubt he (Obama) is intent on emasculating the military and will fire anyone who disagrees with him” over such issues as “homosexuals, women in foxholes, the Obama sequester,” Brady told WND.

“They are purging everyone, and if you want to keep your job, just keep your mouth shut,” one source told WND.

Not only are military service members being demoralized and the ranks’ overall readiness being reduced by the Obama administration’s purge of key leaders, colonels – those lined up in rank to replace outgoing generals – are quietly taking their careers in other directions.

Retired Army Lt. Gen. William G. “Jerry” Boykin, who was with Delta Force and later Deputy Under Secretary of Defense for Intelligence under President George W. Bush, says it is worrying that four-star generals are being retired at the rate that has occurred under Obama.

“Over the past three years, it is unprecedented for the number of four-star generals to be relieved of duty, and not necessarily relieved for cause,” Boykin said.

“I believe there is a purging of the military,” he said. “The problem is worse than we have ever seen.”

Why I Exchanged Salami For Pastrami PART 3