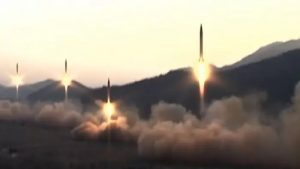 After test firing four missiles and threatening to test another nuclear device, North Korea has also taken nine Malaysians as hostages. The Malaysian citizens were banned from leaving North Korea amid a diplomatic spat over the killing of North Korean leader Kim Jong Un’s half-brother, Kim Jong Nam. But that is a distraction so the world won’t see what North Korea is really up to.

An announcement came from Pyongyang last week on the heels of missile testing. The announcement said that North Korea was rehearsing to hit the United States. The joint chiefs initially suspected that at least one of the projectiles might have been an intercontinental ballistic missile capable of hitting the United States’ West Coast, but later backed away from that analysis. But missile experts at the Middlebury Institute in California have suggested the North Koreans were simulating a nuclear attack on the US Marine Corps air base at Iwakuni, site of the world’s first atomic bombing in the second world war. A hit to Hawaii could also be a possibility.

The four missiles were fired toward Japan. Now, Japan believes it is in mortal danger and is raising the stakes.

Japan’s government said on Thursday as it stepped up its search for countermeasures, including potentially acquiring the capability for a first strike against Pyongyang’s missile bases. Monday’s launch of the four missiles has convinced Tokyo that a nuclear strike against one of its cities or a US military base is now a realistic possibility and that the country needs to strengthen its defences.

The missiles were fired from a known launch site on North Korea’s west coast not far from the border with China. They flew more than 600 miles across the country before splashing into the sea between Japan and the Korean Peninsula.

North Korea builds nuclear weapons for Iran. Their close partnership is a boon for Iran when provocation against the US is desired. Every step the US makes to build up its military in the Middle East is cause for Iran and North Korea to muscle flex. But don’t think this is just muscle flexing and saber rattling. Fighters who muscle flex and rattle are warning their opponent of danger.