Or Just Another Pawn In The Latest War Between Kings?

The US-Russian war over Ukraine is at the forefront again, but this time President Donald Trump is behind it even though he is trying to stay out of it.

The New York Times reports that “a week before Michael T. Flynn resigned as national security adviser, a sealed proposal was hand-delivered to his office, outlining a way for President Trump to lift sanctions against Russia. But the proposal contains more than just a peace plan. Andrii V. Artemenko, the Ukrainian lawmaker, who sees himself as a Trump-style leader of a future Ukraine, claims to have evidence — “names of companies, wire transfers” — showing corruption by the Ukrainian president, Petro O. Poroshenko, that could help oust him. And Mr. Artemenko said he had received encouragement for his plans from top aides to Mr. Putin“. 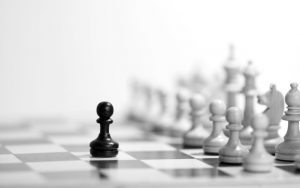 I have reported for many years that the New World Order was split into factions. Pastor Lindsey Williams revealed several years ago that the New World Order had divided along age-related and political lines. The division began between young Democrats and old Republicans in the West before the onset of the Obama administration. Another faction formed during Obama’s eight years in the oval office, these being West and East: US-led and Russian-led New World Order elites.

This became obvious to me when Russia and China formed an economic alliance of nations, BRICS, to retaliate against Obama’s economic war on Russia and China. Obama used Ukraine’s desire to join the European Union as the excuse for economic sanctions. The Syrian war inadvertently became a proxy war between the US and Russia that sucked rubles out of Russia.

Against this backdrop of division entered Donald Trump as candidate for President of the United States. His platform was so antithetical to Obama’s policies that he appeared to be a “real Washington outsider” next to Hillary Clinton. Nothing could be further from the truth. No one rises to the top of the ‘billionaire’ pile without associations and memberships in New World Order clubs and the ability to navigate political circles. Now, with the onset of the Russian scandal, it is possible to put the pieces together as to what Donald Trump really is: an East-led New World Order insider who is retaliating against the Obama years using Obama’s nemesis, President Vladimir Putin of Russia.

According to this article from The New York Times, “Mr. Trump has confounded Democrats and Republicans alike with his repeated praise for the Russian president, Vladimir V. Putin, and his desire to forge an American-Russian alliance. While there is nothing illegal about such unofficial efforts, a proposal that seems to tip toward Russian interests may set off alarms.” President Donald Trump is working hard to reunite the two major factions of the New World Order which was split apart under Obama and it is confusing the blind.

The article, Trump administration ‘had a secret plan to lift Russian sanctions’, reports that “Trump’s personal lawyer and a former business associate met privately in New York City last month with a member of the Ukrainian parliament to discuss a peace plan for that country that could give Russia long-term control over territory it seized in 2014 and lead to the lifting of sanctions against Moscow“. “The Times reported that Cohen said he left the proposal in a sealed envelope in the office of then-national security adviser Michael T. Flynn while visiting Trump in the White House. The meeting took place days before Flynn’s resignation last week following a report in The Washington Post that he had misled Vice President Pence about his discussions in December of election-related sanctions with the Russian ambassador to the United States. Cohen, speaking with The Post on Sunday, acknowledged that the meeting took place and that he had left with the peace proposal in hand.”

“The Times reported that the proposal discussed at last month’s meeting included a plan to require the withdrawal of Russian forces from Eastern Ukraine. Then Ukrainian voters would decide in a referendum whether Crimea, the territory Russia seized in 2014, would be leased to Russia for a 50-year or a 100-year term. Artemenko said Russian leaders supported his proposal, the Times reported.”

The Washington Times reports that “For months, President Trump and his aides have insisted that they had no contact with Russian officials during the presidential campaign, a denial Mr. Trump repeated last week.

“I have nothing to do with Russia,” he told reporters on Thursday. “To the best of my knowledge, no person that I deal with does.”

The denial stands at odds with statements by Russian officials, who have at least twice acknowledged contacts with aides to Mr. Trump before the election.

It is not uncommon for a presidential campaign to speak to foreign officials, which makes the dispute particularly unusual. At the same time, any contacts would have taken place during a period when American intelligence agencies believe the Russian government was trying to disrupt the election with a campaign of computer hacking.“

President Trump must maintain his denial of activities with Russia using a disinformation campaign. Otherwise, it would become apparent which New World Order camp he is operating in. As a business man, he understands the dangers of BRICS to the global US-led economy. This is not to say that Donald Trump is aligned with Russian ideology, but only that he is trying to counter the damage to Russia through Obama’s Ukraine war in order to reunite the two major New World Order factions. Trump’s sudden and strong backlash against Obama’s policies using executive orders in his first week as President has raised Obama’s ire. Now there is a full scale war between the two leaders that was prophesied by Jeremiah around 2,500 years ago.

KJV And lest your heart faint, and ye fear for the rumour that shall be heard in the land; a rumour shall both come one year, and after that in another year shall come a rumour, and violence in the land, ruler against ruler.

ISV And now, so your heart does not grow faint, and so you don’t become frightened because of the rumors that are heard in the land—a rumor comes one year and then after it another rumor comes the next year about violence in the land and one ruler against another ruler.

CEV Don’t be afraid or lose hope, though year after year there are rumors of leaders fighting for control in the city of Babylon.

Jeremiah’s prophecy has to do with end time Babylon and the ongoing struggle between two leaders. The recent formation of a “shadow government” by Barack Obama and George Soros to undermine President Donald Trump fulfills Jeremiah’s prophecy and is more evidence that America is the end time Daughter of Babylon.

Whether Trump’s attempts to reunite the two New World Orders remains to be seen. The US and Russia appear to be on a collision course, a war date with destiny since the Russians’ ancestors are the ancient Medo-Persians who are prophesied to destroy the US Daughter of Babylon.