Prophecy Before Our Eyes: President Trump Is Menacing The Medo-Persians

Is President Donald Trump setting up the United States, Israel, Jordan, Egypt and Saudi Arabia for war with Iran? 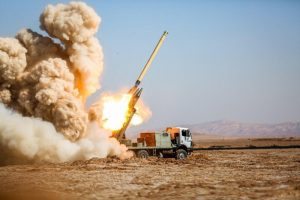 While all eyes are on an executive order that is attempting to secure America’s borders, the media has largely missed the ongoing and up-ticking mess happening between the US-Israel-Saudi Arabia alliance and Iran. Donald Trump and Benjamin Netanyahu are aligning against Iran and Saudi Arabia appears to be joining them.

Air India Express’s suspension of its flights to Tehran is one provocation that some might think is insignificant. But it is not. It is another nail in Iran’s economic coffin. Also, Trump’s latest immigration executive order targets Iran and six other terrorist nations. Both of these situations are sure to increase Iran’s Ire.

Regarding Trump’s latest immigration ban, the BBC reports, “Of the seven majority Muslim countries named in President Trump’s January travel ban (frozen pending a legal review), Iran is the one with the largest US-based diaspora, the most overseas students and the highest number of people travelling on visitor visas“. And don’t think Tehran doesn’t understand that Iran is really Trump’s target.

Advanced rockets and drones were tested during the muscle-flexing exercise while, meantime, Israel tested its skills by attacking Iran’s ally, Hezbollah. The attack took place on the outskirts of Damascus to stop an arms convoy.”

These policies of Trump’s, like those of Obama before him, are setting the stage for the war described in the Book of Daniel, chapter 11 – the war between the kings of the north and south. The United States would do well to back away, but it cannot. Why? Israel is the reason for the coming fight.

The least reason is that Israel has resources which both America and Saudi Arabia want. The more important reason is the fact that both the United States and Saudi Arabia want peace between the Israeli government and the Palestinians because of the drain on monetary resources as well as the driving need to exercise authority of an increasingly nationalistic and right-wing Israeli population.

While there are those political and diplomatic issues at stake, the biggest problem between Iran and Saudi Arabia is religious. Saudi Arabia is a Sunni nation while Iran is Shia. In all of the former Caliphates, the Shia have lost to the Sunnis. The Book of Daniel says that this time, the king of the north – Iran – will sweep over the king of the south – Saudi Arabia – to reverse that direction.

Dan 11:40 And at the time of the end shall the king of the south push at him: and the king of the north shall come against him like a whirlwind, with chariots, and with horsemen, and with many ships; and he shall enter into the countries, and shall overflow and pass over.

The specific countries mentioned are Israel, Jordan and Egypt.

Dan 11:41 He shall enter also into the glorious land, and many countries shall be overthrown: but these shall escape out of his hand, even Edom, and Moab, and the chief of the children of Ammon.
Dan 11:42 He shall stretch forth his hand also upon the countries: and the land of Egypt shall not escape.

Americans believe that Donald Trump will bring peace and prosperity to the United States, the prosperity being more important than the peace. YHVH brings delusion on His people when they are disobedient. So He will bring a man who will make Americans believe they have avoided punishment for walking away from YHVH. For a time, it will seem like America has avoided her much deserved punishment. But one day, when Americans least expect itg , YHVH will judge them. It will come on them suddenly and will be over swiftly. The affects of it will last forever as is prophesied about the end time Daughter of Babylon.

Here is a clue on what will trigger Iran (the remnant of the ancient Medo-Persians) to attach America:

The war between the kings of the north and south – Iran and Saudi Arabia – will be the straw on Iran’s back. “He”, Iran, will “come up like a lion” from Jordan. Jordan will be caught in this war as Iran swoops south and east into Saudi Arabia. After this pseudo-lion conquers Israel, Jordan and Egypt, he and his allies will attack America.

The answer to the question, “Is President Donald Trump setting up Israel, Jordan, Egypt and Saudi Arabia for war with Iran?” happens to be ‘yes’. It will not be intentional. Donald Trump and the majority of Americans, will believe he is doing the right thing and that which is best for United States, Israel, Jordan and Egypt’s security. But he, and all Americans who do not know better, will be wrong.