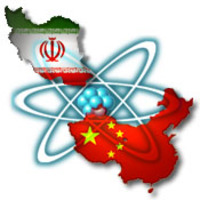 Iran and China have been on a muscle flexing and resolve testing spree against President Donald Trump from the day he was inaugurated. These allies are working together to push back at Trump’s campaign rhetoric and Obama’s disastrous policies. Each country built mighty militaries over the last eight years on Obama’s watch and now they want to show off. But it may not be just showing off.

Barak Obama implemented economic policies against both nations. His Trans-Pacific Partnership was designed to engage the countries in the far east in an economic union to further damage China’s weak economy. The United States escalated its military build up in the western Pacific to protect its allies Japan, Taiwan, Guam and the Paracel Islands. China reacted with military threats but did not cross any red lines because America is its largest importer of manufactured goods. The time for China to stop fearing the loss of America’s imports may be getting close. If China decides it no longer cares about those economic losses, war will follow.

WarOnTheRocks.com reported last week that China is building toward a preemptive strike against the United States. The US-China Economic Review reported, “China’s reason for developing capabilities to hold locations in the Pacific at risk can be traced to the domestic political interests of its leaders.” “China’s decision to develop the ability to strike U.S. facilities in the Asia Pacific in particular stems from a perception that the United States’ presence in the region interferes with Beijing’s objectives.”

“Chinese analysts over the years have identified numerous other U.S. military facilities, potential facilities, alliances, and even relations with non-allies as supporting the U.S. strategy to encircle and contain China. In geographic terms, some implicate countries on or near the first island chain such as the Republic of Korea (ROK) and the Philippines, and on or near the second, such as Australia (particularly given the new U.S. facility in Darwin) and New Zealand, as participating in this strategy. Some analysts include other regional locations such as Vietnam’s Cam Rahn Bay naval base (absent any U.S. presence), the U.S. base in Singapore, and Hawaii. Outside the Pacific, some reference the U.S. military base on Diego Garcia in
the Indian Ocean, U.S. security ties with India, and U.S. attempts to “permeate” Mongolia and Central Asian states with political, military, and economic engagement.”

The economic war against China by Barak Obama may end in Chinese military action against the United States even though President Trump ended the Trans-Pacific Partnership Treaty on his first day in office. The reason is because Trump implemented sanctions against Iran last week for its missile testing. A Chinese-based network is caught in the sanctions that target companies and individuals who supply Iran’s military.

“The sanctions were unusual for identifying two Chinese nationals, Xianhua Jack Qin and Yaodong Richard Yue. Also named was Carol Zhou, also believed to be part of the Chinese procurement network but whose nationality was not disclosed by Treasury. Additionally, two Chinese companies were targeted: Ningbo New Century Import and Export Co. Ltd, based in the eastern port city of Ningbo and managed by Mr. Qin; and Cosailing Business Trading Co. Ltd. based in Qingdao. Mr. Yue told the Reuters news service that he is with Cosailing and had his bank account frozen.”

Wikileaks recently published details about China’s assistance to Iran in building new missile technology. “A 2009 State Department cable said: “Chinese firms over the past year have offered or sold [Missile Technology Control Regime]-controlled and non-annex items to ballistic missile-related entities in foreign countries, including Iran, Pakistan, and Syria. In some cases, sales have continued despite extensive information provided by the U.S. to Chinese authorities outlining our concerns about these firms’ activities.” “The transfers have violated U.S. nonproliferation laws, the U.S. government says.”

The US announced new sanctions against Iran last week for its missile testing activities.

“But the sanctions don’t impact the Iran nuclear deal, according to the administration. The new sanctions, which target individuals and entities involved in Iran’s missile program and support combatant militants outside of Iran, were triggered by Iran’s missile test on Sunday. The sanctions are initial steps to retaliate for provocative actions that violate regional norms, a senior administration official told reporters on a conference call. …The official said Iran faces a choice on how to proceed because the Trump administration will continue to pressure it to change its behavior.”

American companies may face penalties for doing business with Iran. The nuclear deal signed by Barak Obama was supposed to protect companies doing business with Iran, but the new sanctions imposed by Donald Trump may change that. “Internet retail giant Amazon may face sanctions after disclosing that it “processed and delivered” consumer products that are covered by US sanctions on Iran. “We determined that, between January 2012 and December 2016, we processed and delivered orders of consumer products for certain individuals and entities located outside Iran covered by the Iran Threat Reduction and Syria Human Rights Act [ITRA] or other United States sanctions and export control laws,” Amazon stated in a securities filing released on Thursday.” “Some of these sanctions were lifted after a landmark multilateral agreement was reached with Iran in 2015, yet some remain in place. Last week, the US government beefed up the existing sanctions after Tehran conducted a ballistic missile test, blacklisting 13 more Iranian individuals and a dozen businesses.”

Iran is the remnant of the ancient Medo-Persian empire who scripture says will strike the Daughter of Babylon. This “daughter” appears as a great nation on the earth in the end of days. I believe she is the United States (listen to my teaching on the subject). Here are a couple of scriptures that explain what will happen to the Daughter of Babylon:

Jeremiah / Yirmeyahu 51:11 Make bright the arrows; gather the shields: the LORD hath raised up the spirit of the kings of the Medes: for his device is against Babylon, to destroy it; because it is the vengeance of the LORD, the vengeance of his temple.

Isaiah’s end time prophecy is clear. At some point, the Mede-Persians will become so angry over the economic war against them that they will retaliate will military force so strong that “Babylon” will no longer be habitable.

Isaiah 13:19-20 And Babylon, the glory of kingdoms, the beauty of the Chaldees’ excellency, shall be as when God overthrew Sodom and Gomorah. It shall never be inhabited, neither shall it be dwelt in from generation to generation: neither shall the Arabian pitch tent there; neither shall the shepherds make their fold there.

China will strike the US mainland from the Pacific and the Russian border. “‘It was revealed that the pictures were taken in Heilongjiang Province. Military analysts believe that this is perhaps the second Dongfeng-41 strategic missile brigade and it should be deployed in northeastern China,” the report in the Chinese daily adds. The Global Times works under the auspices of the People’s Daily, the official newspaper of the Chinese Communist Party, though the former tends to be more controversial. 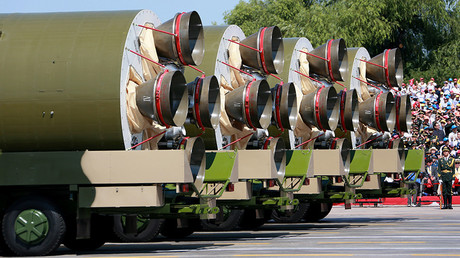 China tests ICBM capable of striking US within half an hour

The DF-41 is a three-stage solid-propellant missile, which is estimated to have a range of up to 15,000km and be capable of delivering up to 10 MIRVed nuclear warheads. China is yet to show the ICBM to the general public during a military parade or any similar event. Most information of the advanced weapon remains highly classified.

There is speculation that China plans to deploy at least three brigades of DF-41s throughout the country. The image leak may have been timed with Trump’s inauguration, with the new president expected to take a confrontational stance towards China, according to the Global Times’ report.

Before taking office he angered Beijing by threatening to end the ‘One China policy’, which acknowledges continental China as the only Chinese nation and rejects Taiwan’s claim to be one. He also said he would pressure Beijing on economic issues like its monetary policy and trade barriers.”

America is now on a path that it cannot veer from. Judgment for Obama’s policies against Israel is coming. YHVH will gather His people and set up His Kingdom. No one knows when these will occur – now or years from now, but the process has begun.

IRAN: ‘ONLY SEVEN MINUTES NEEDED FOR THE IRANIAN MISSILE TO HIT TEL AVIV’

Trump said on Twitter that Iran was “playing with fire.” And, in a statement, US National Security Adviser Michael Flynn said Iran’s “belligerent and lawless” behavior across the Middle East had only increased since it agreed to a deal with six foreign nations meant to govern its nuclear program for more than a decade.

The law passed 60-52 in a late-night vote Monday. The law is expected to be challenged in Israel’s Supreme Court and is likely to face legal hurdles. The law retroactively legalizes several thousand homes built illegally on private Palestinian land. The original landowners would be compensated either with money or alternative land, even if they do not agree to give up their property.

US military hardware, including M1A2 Abrams battle tanks and Bradley infantry fighting vehicles, have arrived in the northern Estonian town of Tapa as part of continued US efforts to counter the alleged Russian threat. More than 50 units of US military equipment, including four battle tanks and 15 infantry fighting vehicles, were delivered to Tapa, the Estonian Defense Forces said in a statement. The personnel of the Charlie Company of 68th Armored Regiment’s 1st Battalion from the US Army 4th Infantry Division arrived in the town two days earlier, on January 30.

Debt Apocalypse Beckons As U.S. Consumer Bankruptcies Do Something They Haven’t Done In Almost 7 Years

When debt grows much faster than GDP for an extended period of time, it is inevitable that a good portion of that debt will start to go bad at some point.  We witnessed a perfect example of this in 2008, and now it is starting to happen again.  Commercial bankruptcies have been rising on a year-over-year basis since late 2015, and this is something that I have written about previously, but now consumer bankruptcies are also increasing.  In fact, we have just witnessed U.S. consumer bankruptcies do something that they haven’t done in nearly 7 years.

Fliers denying the Holocaust and Nazi graffiti found on Cambridge University campus signs have together drawn condemnation from the university’s Jewish Society.

This follows a tweeted photo of a sign found by Dr. Edward Anderson, a research fellow at the Centre of South Asian Studies in Cambridge, was shared along with his concerned response: “Someone has gone around the Sidgwick Site @Cambridge_Uni putting holocaust denial flyers under every windshield. Worrying. #Antisemitism”.