The leader of a Palestinian terrorist group in Lebanon called for an “all-out war” with Israel and Jordan in which Iranian soldiers would fight to “liberate Palestine.”

“I want to see the revolutionary fighters from [Iran] in the Galilee,” Ahmad Jibril, leader of the Popular Front for the Liberation of Palestine-General Command, told Hezbollah’s Al-Mayadeen TV in an interview translated by watchdog group the Middle East Media Research Institute (MEMRI) on Friday. Jibril said “an axis of resistance” should be formed against Israel that would include Syria, Iraq, Iran and Hezbollah. The aim of the resistance would be to fight for “the liberation of Palestine from the Mediterranean Sea to the Jordan River.” After defeating Israel, he said, “we will enter Jordan, whether King Abdullah likes it or not.” The King-of-the-North is on the verge of creating a coalition like the one that is forming between the US, Israel and Saudi Arabia.

UN to Israel: Give Land to ISIS!

So, the U.N. wants Israel to give over the peaceful coexistence in the Golan Heights to… ISIS and war. Why does that makes sense? It’s against International Law, according to the U.N., for Israel to remain in control of this land. Israel is considered the “war criminal” and ISIS and all the terrorists on the other side of the border in Syria should be given control. Does that sound intelligent to you?

Moshe Feiglin, former Knesset member, founder and candidate to head the Zehut (“Identity”) party, imparts his political, economic, and social philosophy in an exclusive and extended interview with Arutz Sheva. Feiglin is not hesitant to say he is preparing for elections and says the government is in its final stretch: “An average government in Israel serves two-and-a-half years, so we are in the final stretch of an average term and this conference brings Zehut into the political dialogue. We will vote in our convention using the primary system. Following the conference we will create tools such as a political slogan and campaign slogans. This conference is going to be unique, full of passion and culture, joy and hope.”

The Iraqi air force Friday, Feb. 24, conducted its first ever bombardment of the Islamic State in Syria. The target was the southeastern town of Abu Kemal near the Iraqi border, to which ISIS has removed most of its command centers from its main Syrian stronghold in Raqqa. Iraqi Defense Ministry spokesman Brig. Gen. Tahseen Ibrahim stated that Baghdad had coordinated the attack with Moscow, Damascus and Tehran using shared intelligence. When he was asked if the United State military was involved, he said he did not know.

A proposal the Trump administration is considering to designate Iran’s Islamic Revolutionary Guard Corps (IRGC) a terrorist organisation has stalled over warnings from defence and intelligence officials that the move could backfire, according to officials familiar with the matter. “If you do that, there is no way to escalate, and you would foreclose any possibility of talking to the Iranians about anything,” one of the officials said, speaking on the condition of anonymity.

Department store operator J.C. Penney Co. Inc. reported a bigger-than-expected drop in same-store sales for the holiday quarter citing weak demand and competition from online retailers, sending shares down to more than a year low. The company on Friday also said it would shutter 130-140 underperforming stores over the next few months to focus on more profitable ones.

Islamic militants in the Philippines have beheaded a 70-year-old German hostage they were holding for ransom, Manila officials said Monday, as Berlin condemned the murder as “unscrupulous and inhumane”. The Abu Sayyaf group, blamed for the worst terror attacks in Philippine history, had demanded a ransom of 30 million pesos ($600,000) be paid by Sunday to spare Jurgen Kantner. After the expiration of the deadline the jihadists, which were monitored by intelligence group SITE, posted a gruesome video showing Kantner being killed by a knife-wielding man. Shortly after the clip appeared Philippines government envoy Jesus Dureza confirmed the death of Kantner, who was abducted from his yacht off the southern Philippines last year.

Duh! America needs to be reminded…! 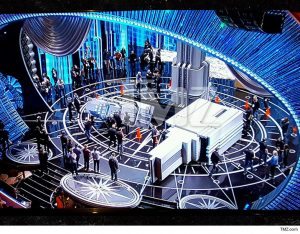 Part of the Oscars stage was left in shambles Sunday morning when a prop crashed down during rehearsals … and TMZ got this photo of the damage. The accident happened around 11:30 AM on the stage at the Dolby Theatre — just hours before the award show was set to begin. We’re told host Jimmy Kimmel was working out a skit at the time, but was off the stage. The props, which appear to be skyscraper models, tumbled over and crushed a camera. We’re told no one was injured though. One witness described it as making a “horrifying sound” as it tore down the curtain.

New technology enabling scientists to manipulate genes, mixing human genes and organs with those of animals, is a disturbing trend in science which one rabbi believes mirrors the sin that led to global destruction in the generation of Noah.