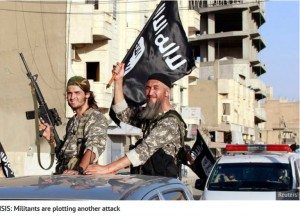 ISIS is planning to provoke a final battle with the West by killing thousands of people in a new atrocity.

The terror group claims have to hundreds of militants in countries in Europe and the US ready to take action on its command.

The warning, made by a respected analyst, comes amid heightened security across Europe amid fears of a New Year’s Eve terror attack.

This year has seen several horrifying terror attacks of varying scales across the West and the rest of the globe, including two atrocities in Paris.

“But first, it wants to show its global reach with zeal…from cells, to lone wolves, to bedroom jihadists – to target landmarks and crowds in dozens of countries across the world.”

“There are close to 40 ISIS affiliates globally with millions of adherents and believers around the world. The New Year may ring in with disturbing terror attacks.

Islamic State chief Abu Bakr al-Baghdadi has called on all Muslims to rise up and overthrow Israel and the West.

However, the terrorist leader may find himself a little disappointed with how his call to arms has worked out.

In a rare message, issued by ISIS chiefs, he said Muslims should “urgently” join the terror organisation.

He added: “Rise up against the apostate tyrants, and avenge your people in Syria, Iraq, and Yemen.”