Is Trump’s Trigger Finger On The Daniel 11 War Gun? 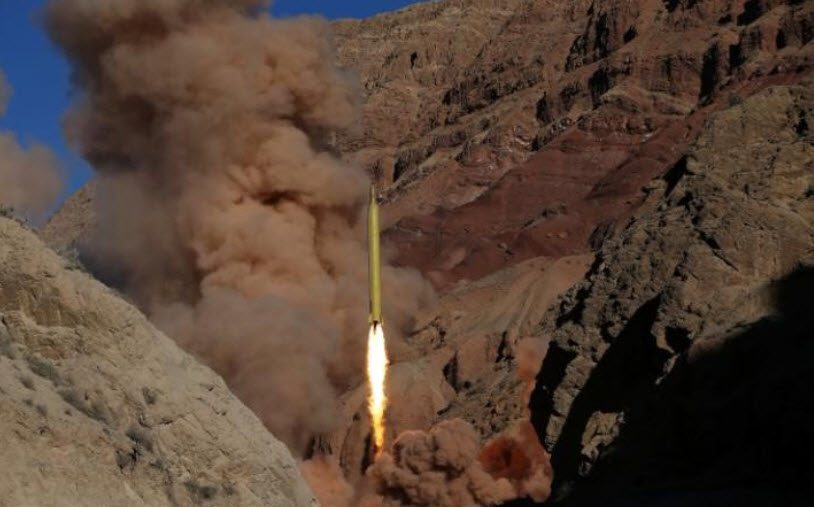 Saudi Arabia is allying with the United States and Israel against Iran. According to Debka.com, “The director of Saudi Arabia’s General intelligence agency, Khalid Bin Ali Al Humaidan, paid surprise visits to Ramallah and Jerusalem on Tuesday and Wednesday, Feb. 21-22. Neither Palestinian nor Israeli officials have confirmed that the visit took place”. This visit is both historic and a sign of things to come.

President Trump has been provoking Iran by threatening to dismantle the nuclear deal and imposing new sanctions. Rex Tillerson, Mr. Trump’s secretary of state, has called for a full review of the deal that Trump says the US has “nothing to show” for.

The King Of The North Is Forming A Coalition

Iran continues to demonstrate its defiance with missile tests, military exercises, building business ties behind Trump’s back and creating a coalition of Shi’ite nations whose sole purpose is to defeat Israel, Jordan and Saudi Arabia. “The leader of a Palestinian terrorist group in Lebanon called for an “all-out war” with Israel and Jordan in which Iranian soldiers would fight to “liberate Palestine.”

“I want to see the revolutionary fighters from [Iran] in the Galilee,” Ahmad Jibril, leader of the Popular Front for the Liberation of Palestine-General Command, told Hezbollah’s Al-Mayadeen TV in an interview translated by watchdog group the Middle East Media Research Institute (MEMRI) on Friday. 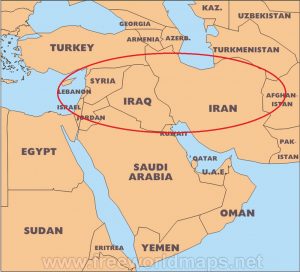 The King of the North from Daniel 11 may be the coalition pictured here: Iran, Iraq, Syria and Lebanon.

Jibril said “an axis of resistance” – i.e. a coalition – should be formed against Israel that would include Syria, Iraq, Iran and Hezbollah. The aim of the resistance would be to fight for “the liberation of Palestine from the Mediterranean Sea to the Jordan River.” 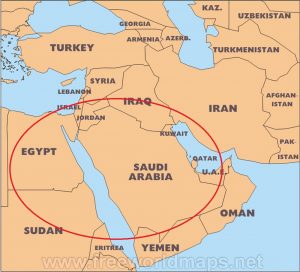 The King of the South may be the new US-Israel-Saudi Arabia alliance.

Read what Daniel says about the King of the North:

Dan 11:39  Thus shall he do in the most strong holds with a strange god, whom he shall acknowledge and increase with glory: and he shall cause them to rule over many, and shall divide the land for gain.
Dan 11:40  And at the time of the end shall the king of the south push at him: and the king of the north shall come against him like a whirlwind, with chariots, and with horsemen, and with many ships; and he shall enter into the countries, and shall overflow and pass over.
Dan 11:41  He shall enter also into the glorious land, and many countries shall be overthrown: but these shall escape out of his hand, even Edom, and Moab, and the chief of the children of Ammon.
Dan 11:42  He shall stretch forth his hand also upon the countries: and the land of Egypt shall not escape.
Dan 11:43  But he shall have power over the treasures of gold and of silver, and over all the precious things of Egypt: and the Libyans and the Ethiopians shall be at his steps.

The King of the North will conquer Israel (the “glorious land), Egypt, Libya and Ethiopia. But there is more in Jeremiah: 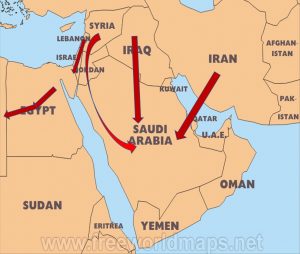 The southward sweep will cut across northern Jordan, into the “swell of Jordan” which is that area that juts out of it. The sweep will be divided along the mountain range, the Golan and West Bank. The King of the North’s armies will split at Israel’s northern border.

Why Are The Kings Actually Two Coalitions?

The Islamic religion has had two main factions fighting for supremacy since 632AD, 1,385 years. The reason the Kings of the North and South are coalitions at the end of days is because the two Islamic factions are still at war. The only three (3) Shi’ite nations on earth are Iran, Iraq and Syria. Lebanon has both a Shi’ite and Sunni representation in its government, but Hezbollah, the Shi’ite faction, is fighting in Syria with its brethren. These nations are a natural alliance because of their Shia dogma.

The Sunni nations are led by Saudi Arabia. The populations of the other Middle East nations are dominated by Sunnis. The United States allied with the Sunnis under Barak Obama. Donald Trump is continuing this association and is encouraging Israel to join the US in its alliance with Saudi Arabia. Egypt and Jordan are at peace with Israel, so the King of the North coalition will conquer them, as well. Libya has oil resources as well as being under Sunni control. Ethiopia will be conquered because Christianity is its most practiced religion. The King of the North coalition will destroy what is left of Christianity in the Middle East.

President Trump’s Finger Is On The Trigger 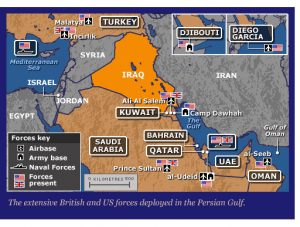 President Trump just ordered more military into the Middle East. Iran is not happy with the United State’s presence over the years of the Obama administration. This latest military buildup is another provocation in a short, but noxious, list of humiliations Donald Trump has perpetrated against Iran starting with announcing the destruction of the Nuclear Deal, the implementation of new sanctions and now building up America’s war machine under Iran’s nose.

The BBC asks, “Are the US and Iran heading for a new confrontation? After a turbulent first three weeks in which President Donald Trump described Iran as “the world’s number one terrorist state” and put it “on notice”, it is a question many are asking“.

Increased military action is to begin within the next two weeks. Will this be the time that we see the final fulfillment of the Kings of the North and South? Will Donald Trump pull the trigger? We will know when it’s over, but keep watching because this could be it!