25 US Jewish Leaders Announce Support for Iran Deal; Jeremiah 49:35-39 and Ezekiel 38-39 Speak of the Consequences 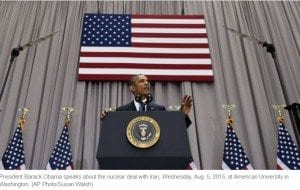 WASHINGTON — There have been letters signed by generals, rabbis, Hollywood folks, and now – as of Thursday morning – a New York Times advertisement signed by a who’s who of Jewish “formers,” 25 mostly erstwhile members of the A-list of American Jewish leadership avowing their support for the Iran nuclear deal.

The prominent newspaper carried a full-page ad, sponsored by a group called the “No Nukes for Iran Project,” which urged Congress to support the Joint Comprehensive Plan of Action (JCPOA), an agreement between Tehran and six world powers to check Iran’s nuclear program in exchange for international sanctions relief.

The clock is ticking for the Obama administration to enlist the support of enough members of Congress to sustain a presidential veto on what is expected to be a Congressional vote of disapproval on the controversial nuclear deal.

The advertisement noted that many of the signers have “devoted decades to building and enhancing Israel’s security and strengthening the US-Israel alliance,” a statement designed to counter claims by some on the American right that no supporter of Israel could endorse the agreement, which Israeli leaders on left and right strongly oppose.